The BRIDE OF THE MONSTER fonts were first inspired by the trailer of the classic film Bride of Frankenstein (1935). The handlettered titles strongly resemble Rudolph Koch’s NEULAND, which contains only caps. (The legendary Neuland was originally handcarved in the 1920s by Koch and remains popular under a variety of names.) My first attempts at the lowercase were made using black paper cutouts. For design reference, I also looked at other Koch fonts like Koch Antigua (also called Locarno or Eve) and, especially, Kabel. My lowercase is “married” to Koch’s original creation, hence the name. This font is dedicated to… continued 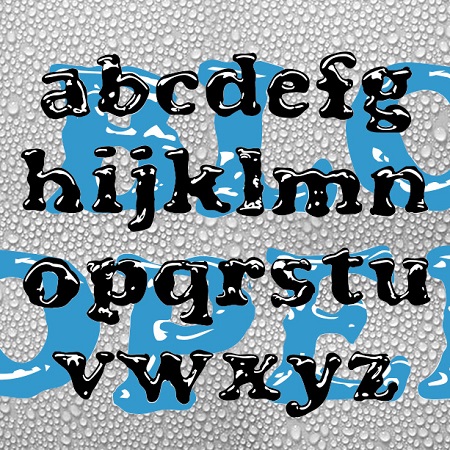 BLOCKED is my reconstruction of a “lost” Letraset font. The original, called “Block Up,” was designed by Sally Ann Grover and was issued in 1974 by Letraset. Block Up is one of countless fonts that didn’t make the technological transition from transfer letters to digital. My digital version was constructed point by point, not autotraced, so it’s very clean. I’ve used all the available characters (except the 4) and rounded it out with more punctuation and international characters. I’m especially fond of my @. The Regular above; that’s what the original looked like. I’ve also created a series of four… continued

BINGO DINGO is a dingbat font inspired by the classic Mexican board game, Lotería. Similar to bingo, with pictures instead of numbers, there’s a fascinating assortment of characters, animals, and other things which I’ve rendered in an engraving-like style. The optional box around the image can be typed with an additional keystroke. 54 images in all. I have not included the names in the designs; label them as you will in any language.

BENIGHTED is my stab at a blackletter font that has a loose, hand-lettered feel. Sort of an Old English Casual or Fraktur Frisky. I drew all the letters with a Sharpie marker (and I’m no calligrapher) and then autotraced them, arranging them along an uneven baseline. Includes upper and lowercase, numbers, punctuation, and international characters.