BUBBLE GUM ROCK is based on a kind of graffiti lettering that kids do. Each letter is a big fat outline that underlaps the one to its left. My friend Kate Lee helped me remember it. To Create The Underlapping Effect, Type Your Sentences Like This Because The Caps Are Designed As Initial Letters And The Lowercase To Follow.This is a set of two fonts that work together. The Outline font contains pseudo brush-drawn outlines; the Fill font is the solid part that goes inside. In a program that allows layering, set the same bit of text in each of… continued

BENIGHTED is my stab at a blackletter font that has a loose, hand-lettered feel. Sort of an Old English Casual or Fraktur Frisky. I drew all the letters with a Sharpie marker (and I’m no calligrapher) and then autotraced them, arranging them along an uneven baseline. Includes upper and lowercase, numbers, punctuation, and international characters. 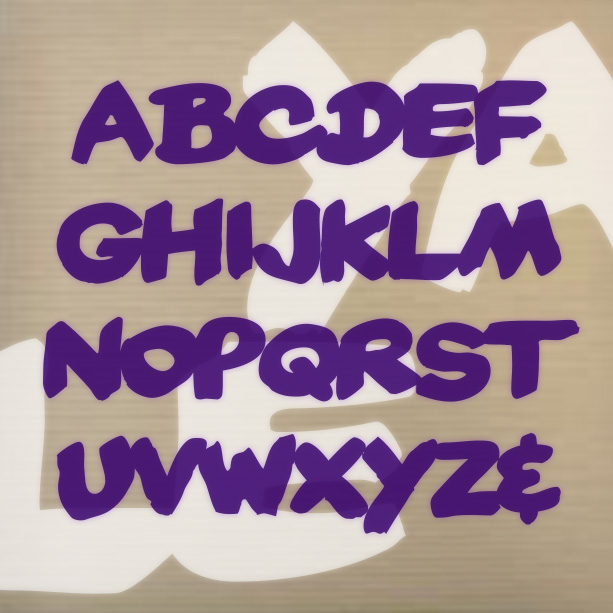 SCREWBALL was inspired by the hand-lettered titles of the movie “What’s Up, Doc?,” Madeline Kahn’s first film. I’m offering this font for free, in Madeline’s memory, but ask that you send a contribution ($5 would be really nice) to the Ovarian Cancer Research Fund or National Ovarian Cancer Coalition. THANK YOU! The opening and closing titles (by The Golds West, Inc.) feature whimsical hand lettering. I’ve worked to make the letters link and collide as much as possible, providing these alternates for a more random feel. What’s Up, Doc? (1972) was produced and directed by Peter Bogdanovich, and stars Barbra… continued

KING HAROLD was inspired by the embroidered lettering on the famous Bayeux Tapestry. The Tapestry was made c.1073-83 and records King Harold’s adventures and loss at the Battle of Hastings to William the Conqueror, with a special appearance by Halley’s Comet. It measures 230 feet long (69 meters) and is one of the great examples of Romanesque art. Although armed with photographs, including some very good close-ups, I still wanted more detail to get the right feel. So I embroidered all the letters and numbers I needed, in imitation of the style of the original, and made the font from… continued

GAMERA was inspired by the hand-lettered titles of the English-language version of certain Gamera films. The font is emphatic and primitive with a rough organic edge, rather like its giant mutated namesake. Gamera was Daiei Studio’s answer to Toho Studio’s Godzilla. At the start of the series, the giant mutated turtle was a grave threat, but then became “friend to all children.” To me, all these such monster movies are just awful, but with the MST3K treatment they become good for a few laughs. Of course the atrocious dubbing and other attempts to sell the films in the West may… continued