SKIDZ was inspired by a sticker in which the letters where superimposed over a tire tread pattern. I’ve created my own tread pattern, subtracting letters based on Max Kaufmann’s classic font Balloon. When you type, the letters align to form an entire tire mark with white letters. The brackets and underscore can be used to create natural-shaped ends and patterned space between words. SKIDZ contains caps, numbers, punctuation, and international characters. But they’re a bit lost in the edge of the tread, so I’ve made a separate font, SKIDZ EXTRA, with an extra line of somewhat sharper tread pattern to… continued

SCREWBALL was inspired by the hand-lettered titles of the movie “What’s Up, Doc?,” Madeline Kahn’s first film. I’m offering this font for free, in Madeline’s memory, but ask that you send a contribution ($5 would be really nice) to the Ovarian Cancer Research Fund or National Ovarian Cancer Coalition. THANK YOU! The opening and closing titles (by The Golds West, Inc.) feature whimsical hand lettering. I’ve worked to make the letters link and collide as much as possible, providing these alternates for a more random feel. What’s Up, Doc? (1972) was produced and directed by Peter Bogdanovich, and stars Barbra… continued

Instead of making something that people want, that I could sell, I made this silly experiment: PRETZ. The idea is that each letter has been broken, cut, or chewed out of a conventional twisted pretzel shape. As I only cheated on a couple of characters ($ ¢ ¥ Œ Æ), you have to use a bit of imagination to read them all. It comes in both Salted and Unsalted varieties. Each font contains caps, numbers, punctuation, and international characters.

POPSTARS was inspired by the hand lettering on the cover of the classic Beatles album, Magical Mystery Tour. The B from Beatles is about actual size at left; weren’t vinyl album covers great? This pair of fonts can be used separately or layered as in the animation on this page. Each font includes caps, lower case, numbers, punctuation, and international characters.

Like its predecessor Calaveras, HEARTLAND is a take-off on the classic 60s flower font Daisyland*. This time I’ve substituted hearts for the original flowers. For the animation on this page, companion fonts containing just the hearts (pink) and more background hearts (maroon) were used; these are available à la carte. Includes 2 versions of each letter, plus numbers, punctuation, and international characters. *The Daisyland font appears under that name in the Dan X. Solo font books from Dover. There is a nice shareware version called FLORALIES by Keith Field and a free but bumpy adaptation (called Daisyland and uncredited) in… continued

HARLEQUIN was inspired by this poster from the 1953 film Kiss Me Kate (detail at left). It has a jolly jester’s hat feel and also resembles turned wooden spindles. Includes caps, numbers, punctuation, and international characters.         As seen in use in these “personalized totes for the eco-check girl,” from Label Me Lisa.

A fun little font with a second-hand history. The basic idea came from my recollection of a rough sketch.* The handprints are combined with a knockoff version of Morris Fuller Benton’s classic Hobo font. Besides the hands, it differs from regular Hobo in that it is much bolder and has descending lowercase letters. Includes caps, lowercase, numbers, punctuation, ligatures, international characters, and several pairs of black handprints. *A proposal for a “hands on” event, the sketch came from a brainstorming session of the “Young Turks Committee” at The Arts Center of the Capital Region, which included Lisa Roche, Donna Brunig,… continued 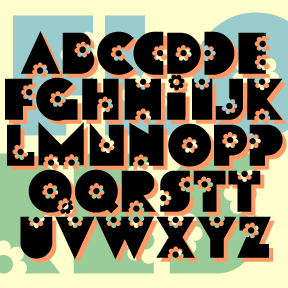 FLORES first appeared in 2001, inspired by this florist’s sign in Valencia, Spain. I started with the 6 given letters and made up the others. With a happy 70s deco feel, the 7-petalled flowers are negative spaces which appear as the background or paper color. Now, thanks to a discussion on Typophile, I have seen more original letters, as in “Sachet Discret” and “Fleurdon” (below) and added them to the font. I was also happy to see that Flores (with my original C and H) appeared in this CBS News segment about typography. Includes caps, alternates in the lowercase positions,… continued