POPSTARS was inspired by the hand lettering on the cover of the classic Beatles album, Magical Mystery Tour. The B from Beatles is about actual size at left; weren’t vinyl album covers great? This pair of fonts can be used separately or layered as in the animation on this page. Each font includes caps, lower case, numbers, punctuation, and international characters.

PESSIMA combines elegance and corrosion. It was inspired by the opening titles of the film Invasion of the Body Snatchers (the 1978 version, my favorite, directed by Philip Kaufman, titles by Pacific Title). It appears to be a corroded, bold version of Optima*, Hermann Zapf’s classic “serifless roman” from 1958. In the film, the corrosion varies from letter to letter and cleverly suggests the biologic horror to come. This is not the original Optima* of gentle curves, but my jagged re-drawing of it. Despite the battering, the overall shapes are still somewhat recognizable. My font is more striated, less randomly… continued

Like its predecessors Calaveras and Heartland, PEACE is a take-off on the classic 60s flower font Daisyland*. Includes 2 versions of each letter, plus numbers, punctuation, and international characters. Inspired by Albany’s 15 minutes of fame; read about it at thesmokinggun.com. *The Daisyland font appears under that name in the Dan X. Solo font books from Dover. There is a nice shareware version called FLORALIES by Keith Field and a free but bumpy adaptation (called Daisyland and uncredited) in FontPak1.zip. (Thanks to Frogii for the information!) 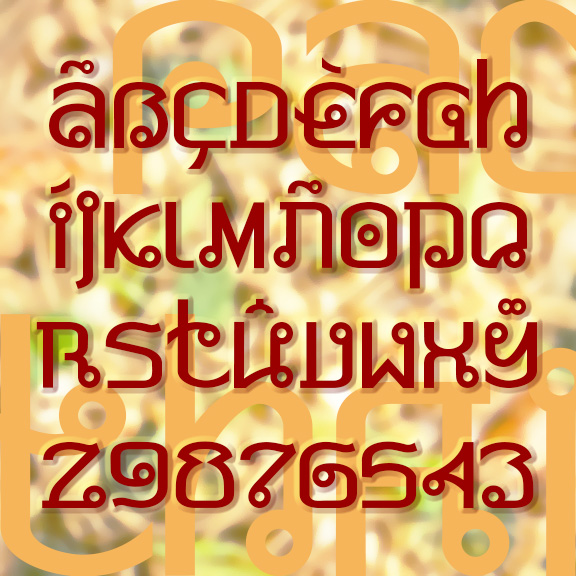 PAD THAI is my attempt at a Roman-alphabet font that simulates the look of Thai script. The striking texture of Thai script comes from the many small loops, the single case, and the generous application of diacritic marks. This is what I’ve tried to suggest with this font. When using the Pad Thai font, use lots of åcçèñt márks even if you don’t need them for a more Thai texture. There are many beautiful and intricate Thai fonts; I used a very simple one (Ayuthaya) as my model so I could see the structure of the characters better. If you… continued

These are derived from a pattern sheet provided with a set of Japanese wood-carving tools. The only thing I could read on the page: ’82 New Year. There are 22 charming graphics, including a few nice dogs, some handsome calligraphy, and some cute cartoony stuff. Julie tells me the blue character at left means “long life”; any help with the others?

NEUROTOXIN was inspired by the Xerox Corporation’s former X logo, designed in 1994 by Landor Associates. Each letter is modified to appear to be forming from, or dissipating into, pixels, suggesting a transition from digital to analog and back. The basic letterforms are patterned after a bold Didone-type font. Serve with a nice Bodoni or even Times Roman. Includes caps, numbers, punctuation, numbers, and international characters.