The GAUDI fonts are named for the great Catalan architect Antoni Gaudí (1852-1926). His visionary buildings in Barcelona are strangely biomorphic, all curves and intricate surfaces, often covered with broken-plate and -tile mosaics.  Gaudí didn’t invent that folk-art form (called “trencadís” in Catalan and “pique assiette” or “picassiette” in French) but his use of it on walls, benches, sculpture, and even rooftops makes a simple craft sublime.  Another wonderful example of this artform is the Maison Picassiette in Chartres by Raymond Isidore (1900-1964), though it was unknown to me when I made these fonts. For my font, I’ve made rough-shaped… continued

The FOAM fonts began as variations of my Oblique Text fonts.  I started over, rounding and reducing the number of serifs.  Then I expanded it to a set of six, which looks great italicized too. To name the font, I had a little contest at Sage College of Albany, where I teach.  I got some good suggestions by e-mail, but my favorite was written anonymously on one of the flyers! Each font includes upper- and lowercase, numbers, punctuation, and international characters. .

A few keystrokes, and a crowd appears.  FLASH MOB combines hundreds of human silhouettes with letterforms inspired by OCR-A, the machine-readable font from 1960. Includes a few useful extras in the { } and ~ positions as well as a zebra crosswalk in the underscore position. Includes upper- and lowercase, numbers, punctuation and international characters. Due to technical limitations, capital letters do not have accent marks. .

The DILEMMA fonts were inspired by the evolving logo of Sears.  One font in the set is illustrated in black and white above: two black stripes and one white one. The other two fonts have one stripe each.  When overlapped and assigned different colors, they can be used as in the blue illustration, creating a tricolor effect (counting the background). The oldest of these Sears logos has all caps and a white stripe with gaps that suggest overlapping tracks (the best of the three, in my opinion, and still on my local Sears store.) Then they simplified it and the… continued

CHAPEAU and CORSET are a pair of figurative fonts inspired by the 1902 Sears Catalog. The ladies’ intricate hatted portraits and corsetted figures (very “Gibson girl”) are adapted from product illustrations. Each is paired with a letter adapted from a particular headline font (Binner) used often in the catalog. Each font contains illuminated caps, including international, and an ampersand. CHAPEAU and CORSET are available as for $5. Try out the demo which contains some of each font, then pay just $5 for the pair of complete TrueType or Type 1 font for Windows or for Mac. “Binner Poster” or simply… continued

CELESTIAL ALPHABET was inspired by ancient writings which saw Hebrew letters in the stars. This is related to the Kabbalah and other mystical texts which sought to find structure and meaning in the alphabet and place its origin in heaven itself. An interesting source is An Alphabetic Labyrinth: The Letters in History and Imagination by Johanna Drucker. In there you’ll find everything you ever wanted to know about the history of writing, including its meaning and purposes. I have used the ancient style to create this Roman alphabet with many alternate characters, numbers, punctuation, and international characters. The graphic above… continued

My BOSTON LINE fonts were inspired by Boston Line Type, developed in the 1830s by Samuel Gridley Howe (left) for use in raised-letter printing for the blind.  The odd diamond-shaped a, d, and o and generous spacing give the inkless, embossed pages a strange beauty.  A variety of books were eventually printed with this distinctive type, including a beautiful Bible of in 1842. Many blind people found Roman letters difficult to read and all such systems were eventually replaced by Braille.  Howe’s legacy lives on in Boston’s Perkins School for the Blind, which he founded. The compatible PHILADELPHIA LINE fonts… continued 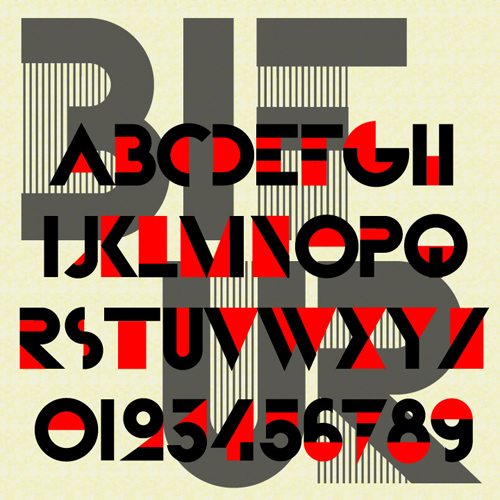 BIFUR is my digital interpretation of the classic analog Art Deco font of the same name. Bifur was designed by A. M. Cassandre and released in 1929 by Deberny & Peignot of Paris. The font is remarkable for its visually exciting two-tone Art Deco look and dramatic simplification of the letterforms. Historically produced in variety of 1- and 2-color versions, I’ve re-created Bifur as a set of six fonts which can be combined in layers to easily create high-resolution text graphics. At long last, I’m offering this as a set of opentype fonts. You can use Bifur Classic or Classic… continued

APERTURE is a special effects font, creating text that is intentionally difficult to read. It could be used to create puzzles and optical illusions or give a futuristic, sci-fi feel to your text. It plays with positive and negative space, presenting the spaces between letters as shapes. There’s also a solid font that is somewhat easier to read; the fonts can be used together or separately. To create bits of enclosed text, start and end each phrase with a parenthesis or bracket; there are 4 shapes to choose from.  Instead of a space, type an underscore to create a continuous… continued