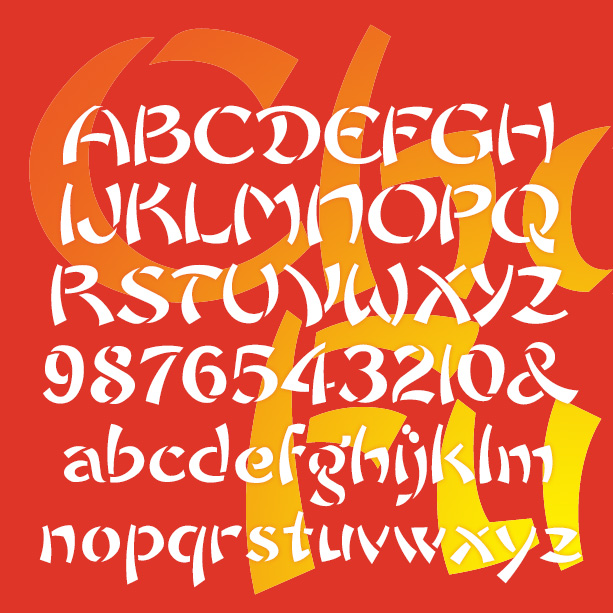 ALHAMBRA was inspired by the look of Kufi (or Kufic) script, a style of Arabic calligraphy characterized by a square, angular construction. The letters are linked, like all Arabic script, but do not have the sweeping curves of Legende and other fonts commonly used to simulate Arabic. A second font, ALHAMBRA DEEP, has a double-thick baseline. The Arabic alphabet is written from right to left and does not include vowels, which are recorded as dots and other diacritical marks. I have included features to better suggest the texture of Arabic script; check the Read Me file for easy details. The… continued

SHAZI was inspired by the beautiful anthropomorphic calligraphy by the Iranian artist of the same name.  The Freer Gallery in Washington, DC has a beautiful silver pen case (left) encircled by an inscription of human- and animal-headed letters, signed and dated 1210-11 A.D. Another example in the connected Sackler Gallery has similar letterfoms, but only humans. For my adaptation, I started with my own warped version of the classic Art Nouveau font Japanet, then added the squarish faces.  I’ve used only lowercase letters because they best resembled the standing figures of the original. The complete version of Shazi contains all… continued

SEOUL is another pseudo-Asian font, but this time it’s modeled after Korean rather than the usual Chinese or Japanese script.  The basic design is contemporary, rather than brush-like. SEOUL CAPS recreates the uniform weight and width of the Korean letters and borrows or approximates a number of actual forms. The companion font, SEOUL STACKING, can be used to intersperse stacked pairs of letters (as in the sample block) for a more authentically “Korean” look.  To get a stacked pair, you simply type the upper letter in upper case, then the lower letter in lower case. Obviously this is for special… continued